Ivanhoé Cambridge’s Le 1500 has cemented its place as one of the most energy-efficient office buildings in Montreal with a LEED Existing Buildings: Operations & Maintenance (EB:O&M) certification from the Canada Green Building Council to join its BOMA BEST Platinum certification. 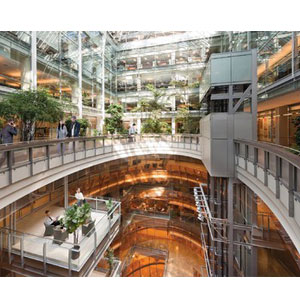 “There was no renovation, but constant optimization of the infrastructure over the years, starting in 2002,” said Ivanhoé Cambridge vice-president of retail operations Johanne Marcotte. “A retro-commissioning analysis was performed by an external firm to optimize Le 1500’s operations and maintenance procedures, and help identify improvement opportunities using a whole building systems approach.”

Natural light floods Le 1500’s interior thanks to a glass roof that overlooks a nine-storey atrium and an indoor garden. The building’s glass curtain-wall provides ample fenestration and a view of the surrounding cityscape.

“Ivanhoé Cambridge embraces best practices in environmental stewardship and strives to comply with the most rigorous sustainable building standards,” said Marcotte. “As a result, it attracts high-quality tenants and reduces operating costs by lowering energy use at its properties.”

Le 1500 has comprehensive recycling and composting services for tenants. Nearly 23 tons of organic materials were diverted from landfills in 2015, an increase of 32.3 per cent over 2014. Cardboard and paper consumption was cut by 18 per cent, representing more than 32 tons, during that same period.

“We strongly believe in the importance of communicating and educating our tenants when it comes to sustainable development,” said Marcotte.

“We produced an office occupant’s sustainability guide to assist our tenants looking for ways to implement energy- and water-efficiency measures. We also provide them with tips on how to maintain a healthy indoor environment as well as encourage them to participate in our waste diversion programs.”

The building was originally six storeys when it was built in 1925, and the Eaton’s in it was Montreal’s largest department store for 75 years. Three more levels were added in 1930 and 1931 and the property was further expanded toward De Maisonneuve Boulevard in 1958 and 1959. It was linked to the McGill subway station in 1967 and it also connects to the city’s 32-kilometre underground network.

Ivanhoé Cambridge acquired the property in 1999 following the closure of the Eaton store. Extensive renovations ensued in 2000 and 2002, transforming it into Complexe Les Ailes & 1500 University. The building’s name changed to Le 1500 after University Street became Robert-Bourassa Boulevard in 2015.

The retail and office building won the BOMA Québec Building of the Year Award in 2011-2012 in the 500,000 to one million square feet category and the BOMA Quebec Environment Award for office buildings in 2015-2016.

“Ivanhoé Cambridge values environmental certifications, as they showcase the quality of the building’s construction and management,” said Marcotte.

Le 1500 has a gross leasable area of 527,604 square feet and an occupancy rate of 94 per cent. More than 2,500 people work there for companies including Nuance, CIBC and Hydro-Québec. It’s also the home of the head office of L’Oréal Canada.

Lufa Farms has a rooftop greenhouse on Le 1500 that offers employees the opportunity to purchase fresh fruits, vegetables and other products. A BIXI multi-user program was introduced in 2013 and gives tenants free use of bicycles for up to 60 minutes during office hours.

“As a socially responsible company, Ivanhoé Cambridge is committed to creating living spaces that maximize tenants’ and customers’ comfort, safety and quality of life, and minimize their environmental footprint,” said Marcotte.